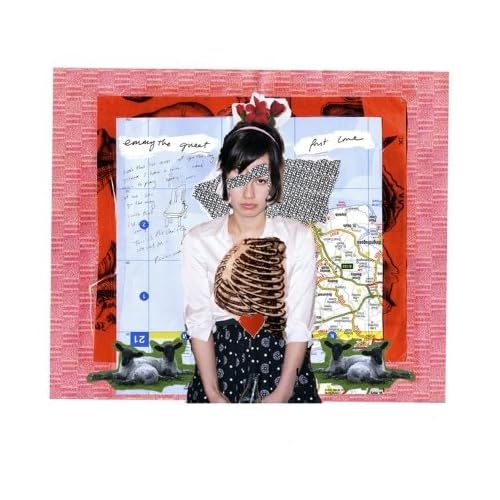 The title of this album could not be more fitting. Emmy The
Great's first record strives to capture that magical, muddled
debut attempt at meaningful connection. It is a startlingly
intimate, patchy record that is not destined or designed to be
adored forever. Yet, while it lasts, it is easy to kid
yourself that it is surprisingly wonderful, for all of its
blemishes and imperfections.

It is unashamedly stark in its subject matter, with Emmy's
young heart laid on the line from its opening and tied there
until its end. Simple arrangements tangle around her lines of
loss, affection, despondency and humour. There is little
inflection from the theme, but the likes of We Almost Had A
Baby and Dylan are delivered with sincerity and manage to
cajole fondness for their singer.

References are sewn throughout, from the aforementioned
Zimmerman nod to the title track, which picks at Leonard
Cohen's Hallelujah with at least more invention than a certain
X Factor winner. The highlight of these artist allusions,
though, is MIA, a delicate acoustic strum playing with the
tapestry of an innocuous conversation concerning the singer.

Emmy's voice is unspectacular, but this fits the sparse sound
by never overpowering it, such as on Everything Reminds Me Of
You. It allows the lines to shine more, which betrays her
immaturity as a writer, but also showcases the standout lines.
Also, for those who enjoy the soap-style relations between the
whole new-folk scene, there is plenty of scope for speculation
about the subjects of lyrics.

One song that should have been cut is 24, a hackneyed hash
that loosely hangs upon the foundations of the hit US
television show and is neither clever nor interesting. But the
misses are rare, Emmy's dreamy style just about carrying off
numerous corny moments, such as grating references to 13th
century Italian literature and the shipping news.

Regardless, On The Museum Island makes up for these. As she
focuses on friendship, clarity flows out of lines of a Berlin
escape filled with renewal and remembrance. If it wasn't so
dainty it would be harrowing, such is the unrelenting
emotional nature of the content.

The album triumphs through its honesty more than anything, its
personal nature - self released, funded and produced -
validating this. There isn't a throwaway happy folk jig in
sight, even the throwaways deal with heartache. But this is
fitting, creating a record filled with substance despite its
prettiness, which makes it hard to forget, like your very own
first one that got away.

Emmy The Great, who is about to tour the UK, has covered Ash's
2001 hit 'Burn Baby Burn' for the B-side of their next single.

The track will feature as the B-side for single 'First Love',
which will be released on seven-inch vinyl and download
formats on February 23rd. It is the title track of her debut
album, which was out yesterday.

Anyone can re up the album please?

In need for some of the rarer stuff possibly out there....Secret Circus EP etc.