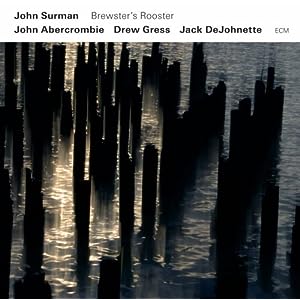 Saxophonist and composer John Surman has, in his nearly 50-year career, played and recorded in as many settings as one might imagine. Whether it's experimental free music, rockist fusion projects, large ensembles, solo, duets, concept recordings, you name it. His ECM tenure has been a fascinating one. That said, no matter how far afield his explorations have taken him, the place he always returns to, is playing jazz -- some might meritoriously argue the point that no matter what he does, jazz lies at its root. Brewster's Rooster is indeed a pretty straight-ahead jazz date. Accompanied by guitarist John Abercrombie, drummer Jack DeJohnette, and bassist Drew Gress. The sound on the recording, while contemporary, does hearken back to the heady days of ECM in the late '70s. Seven of the nine cuts here are Surman originals, the two covers are an utterly gorgeous reading of "Chelsea Bridge," and John Warren's "Slanted Sky," which opens the set. The band can swing when they need (or want) to: check the set's second cut, "Hilltop Dancer," with some beautifully understated work by Abercrombie and double-timed, Latin syncopation by DeJohnette. The lyric line is Spanish-tinged and Surman is in excellent post-bop form, extending the harmonic possibility with a gloriously knotty chorus. "Slanted Sky" is a more atmospheric tune. It's slow, but flows nearly pastorally with Surman's horn moving through the melody and taking the improvisation into subtle territory. "No Finesse" is another swinger and "Kickback," which begins with a taut, labyrinthine lyric line, quickly moves into adventurous harmonic terrain before a duet between Surman and DeJohnette move it to the stratosphere. It's kinetic, head-to-head, and a real "moment" in jazz terms. The reading of Billy Strayhorn's "Chelsea Bridge" is particularly lovely here. Surman's baritone saxophone is painted beautifully by Abercrombie's subtle chord voicings and the sparse arrangement. But it's Surman's lyricism that impresses most. It's tender and tough with that slight edge in his tone. The track loses none of its grace or elegance, but feels less nostalgic in this context. "Haywain" is slightly more out with an excellent and prolonged contrapuntal exchange between Surman and Abercrombie. Brewster's Rooster is another high point in Surman's career. This studio band is as sympathetic as his working road unit, and his willingness to place the tradition in the context of his more contemporary, sometimes ambiguous harmonic explorations reveals the roots, shoots, and branches of his art and discipline.