Personnel: Steve Tibbetts (synthesizer, guitar, kalimba); Marc Anderson (drums, congas, percussion); Bob Hughes (bass); Tim Weinhold (bongos, vase, bells); Steve Cochrane, Marcus Wise (tabla). Recorded in Minneapolis, Minnesota. Tibbetts makes metallic folk music for disenfranchised folks. He's an elegant and multifaceted player, his compositions making use of exotic jungle rhythms (courtesy of longtime foil Marc Anderson), jazz-rock signatures, and regal European atmospheres. Tibbetts is one of the more idiosyncratic guitarists of the jazz/rock interface, with an uncanny ability to softly fondle his instrument yet rearrange its vocabulary to resemble nothing less than a sitar or tabla. The opening "Ur" begins with a pigeon's rush of flailing acoustic guitar before electric strings start to sizzle through the air like errant lightning. The incorporation of tablas, vases, bells, and sundry percussive devices gives the recording a noticeably Middle Eastern flavor. YR is much like rich Gypsy music as played by accomplished technology-savvy types intent on extolling the true virtues of their music. Tibbets and Anderson make beautiful, cascading music for those times when trad jazz just doesn't cut it, the mind has had it with new age, and the heart needs just the right hunk of rock 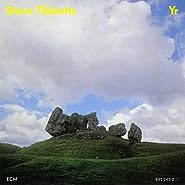 Alongside Stephan Micus, Steve Tibbetts occupies a
somewhat rare position in ECM's roster of longstanding
musical collaborators. Like the German
composer/multi-instrumentalist, this "Zen Guitarist"
defies ECM's general rule of two days to record, one day
to mix (with minimal editing and overdubbing); instead,
Tibbetts has, with rare exception, recorded his music
from a home base in St. Paul, Minneapolisagain like
Micus, sometimes taking years between recordings and with
minimal label intervention. Unlike Micus, however, who
produces his albums in isolation, Tibbetts regularly
collaborates with others, most notably percussionist Marc
Andersona constant companion since the guitarist's ECM
debut, Northern Song (1982).

Despite Tibbetts' recruitment of others engendering a
certain spontaneity absent in Micus' carefully
constructed work, his similarly multi-tracked music does
rely on texturally expansive but sonically detailed
soundscapes. Like 1994's career milestone, The Fall of Us
All (1994), A Man About a Horse (2002) was a deceptively
ambitious collection of largely calming but still
unequivocally deep performances, calling upon a larger
cast of characters. Natural Causes's return to the
relative simplicity of a duo with Andersonlast heard on
Northern Song (1982)still stands out amongst Tibbetts'
ECM discography for its all-acoustic nature.

Simpler in premise, perhaps, but comparisons with
Northern Song only demonstrate just how far Tibbetts has
come. His predilection, here, for 12-string acoustic
guitar might draw superficial comparison to label mate
Ralph Towner, but Tibbetts eschews the Oregon cofounder's
detailed, change-heavy compositional constructs; relying,
instead, on miniature orchestration built from relatively
diminutive instrumentation. Tibbetts layers over 20
guitar tracks on "Gulezian"co-written with guitarist
Michael Gulezian and the only piece not written solely by
Tibbettswithout ever feeling overcrowded. Its overt
folksiness reflects the perennially undervalued
Gulezian's biggest touchstoneacoustic guitar icons like
Leo Kottke and John Faheybut with Tibbetts at the helm
it retains, unsurprisingly, an episodic sense of
evolution, as miniature moments of serenity and
near-silence contrast with rhythmic passages driven only
occasionally by Anderson's economy of sound and pulse.

All-acoustic it may be, but Tibbetts' still employs some
studio wizardry to create lush sonic backdrops, as he
does at the end of "Lakshmivanam." Billed as a duo
recording, Natural Causes' multifaceted nature,
continually revealing layers and trance-inducing
sonorities make clear that there's a silent third
partner: the studio itself. Natural Causes couldn't have
been created outside the confines of the recording studio
butin its organic holism and absolutely timeless
naturefeels as though it were made in some remote
outdoor locale. Natural Causes' vivid imagery makes it,
in fact, the ideal companion to Norwegian pianist Ketil
Bjrnstad's similarly cinematic but utterly different
Remembrance, also released in North American by ECM, on
the same day.

looking for the choying drolma & steve tibbetts albums. Anyone with links?