Mower is an explosive live act launched from San Diego, California with a reputation for heavy music, inciting lyrics and insane stage performances.

Mower's latest CD, "Not For You" was released May 16, 2006 and the band toured for a month with (hed)p.e. in support of the disc and will be heading out again in August for another nationwide tour Outburn Magazine gave the disc a 9 out of 10 rating and reviews have been great thus far.

Mower's video for "Road Rage" was recently aired on MTV2's Headbanger's Ball and the band was featured in a full page No Fear ad in Revolver Magazine. Support for the band increases steadily as their no-bullshit style of rock n' roll is winning over punk, metal, and hardcore fans alike.

Early shows with GWAR, hed(pe), System of a Down, Fear and a Vans Warped Tour date raised eyebrows in the music industry and the band released their self titled debut on Suburban Noize Records.

Mower's momentum is growing and the list of prominent acts Mower has performed alongside has grown with it. Mower is a veteran of shows with Metallica, Slayer, Deftones, Linkin Park, P.O.D., Staind and more.

Tours with Soulfly, Phunk Junkeez and Adema have helped build Mowers fan base across the United States. The release of the Mower CD in Japan has given the band a taste of international success, and arena shows with Disturbed and Kottonmouth Kings have allowed Mower to hone their skills in front of large audiences.

Not For You was recorded in Los Angeles with one of the founders of the legendary band Snot, producer Mikey Doling.

I "pollaco" and "fgabriel" we have been looking for three discs, it is true, also they have a disc that is called people are cruel, it is possible that we upload them in a few days.

For the time being eat bludgeon. 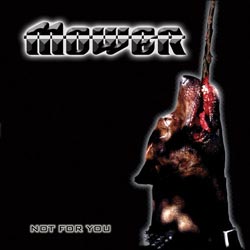 KaiN[ULTRAfan]
i don't understand russian...but watching your message and the gif...i think you don't like sendspace...this is not my problem, the rest of people likes it and it works well...