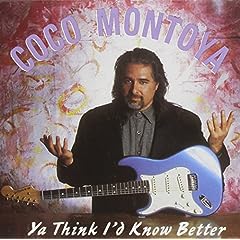 Coco's scorching sophomore album, Ya Think I'd Know Better, came on the heels of his Handy Award and firmly placed him in the top ranks of today's rock and roots music performers. The release stayed on the Billboard Magazine Blues Chart for 14 weeks and earned the number six spot on the"Top 10 Best-Selling Independent Label" blues releases of 1996. Blues Revue magazine said "Montoya's strat leads rage across the disc like brush fire.....(he's) a modern blues master." Guitar Magazine called the release"a ripping trip through 11 lively blues-rock sides," while Guitar World exclaimed Coco to be"in the forefront of contemporary blues guitarists." 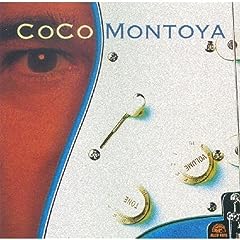 Guitarist Coco Montoya started out playing rock & roll, and it shows. On his fourth album, the former John Mayall and Albert Collins sideman rocks his blues hard, with the occasional soul-flavored ballad thrown in for variety. The album kicks off on a note that's high-energy yet relaxed, as Montoya declares that "Enough Is Enough." "I Need Your Love in My Life" is as upbeat and cheering as can be, a sure cure for rainy-day doldrums. And with "Don't Take It Personally" and "You Didn't Think About That," Montoya certainly rocks out. But he's got a soft side too, as the smoky "Fool" and the tender "Nothing but Love" handily illustrate. Although, like his mentor Mayall, Montoya is an indifferent vocalist, he more than makes up for it with his guitar work, which is both expressive and technically brilliant--the blistering solo on "Beyond the Blues" is proof enough of that. Suspicion is Montoya's first album for Alligator Records, and it's unsurprisingly a bit smoother around the edges than his previous records for Blind Pig. Still, it's a strong effort all around, with touches of real warmth and sweetness.

Given his past work with starmaker John Mayall and Albert Collins, it's no surprise that Coco Montoya has turned out solid, consistent blues-rock since his debut in 1995. Can't Look Back is his second album since his move to Alligator Records, and it's very similar to 2000's Suspicion in sound and structure. That means it's a collection of energetic, taut blues-rock with originals that hold their own with the covers, although Collins's "Same Old Thing" does stand out. Other highlights include the tightly wound "Running Away from Love," the strangely pyrotechnic "Can't See the Streets for My Tears," and the tension generated by the contrast between music and lyrics on the title track. Overall, Montoya is settling nicely into a classic blues-rock sound that generates its own momentum and showcases his considerable talent.

I only had "can't look back" and that's great blues-rock !!! 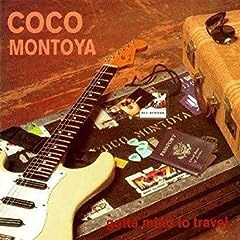 Enjoy!
Being a little bit too good is a whole lot too dangerous!