for THE JESUS AND MARY CHAIN, MY BLOODY VALENTINE, RIDE, B.R.M.C. etc. fans 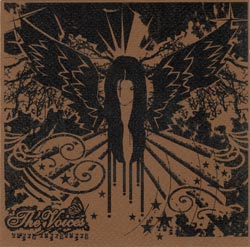 It begins as every album should; the title track's
blizzard of feedback, dreamlike vocals and pulsing beat
let you know what this is all about in no uncertain terms.
The Sound Of Young America is where repetition meets
bliss, where redemption is found in a confused din and
where beauty meets noise.

Check out I'll Always Be Within You... with its sweet
melody just heard beneath the crunch and howl of guitars.
Don't Let Go offers a plaintive cry backed with a frail
organ drone before it explodes, sparkler-like, halfway
through.

The true centre of the album though comes with You Shared
A Smile I Thought Was True..., a strung-out slice of
shimmering guitar, echoing female vocals and electric
slide guitar. Its counterpart, ...You Broke A Heart I Gave
To You, a monolithic slab of grinding riffs nestled
amongst a whirlwind of feedback.

Released on 4th June 2007 by My Kung Fu, The Sound Of
Young America is a perfectly refined 45 minutes of
everything that The Voices stand for. It is preceded by
the digital single release of I'll Always Be Within You
When There's No One Left Inside on 7th May 2007.

could anyone, please, re-up these, and somewhere else (rapidshare, megaupload, sharebee...)?
thank you in advance.