Spoiler NYC has teamed up with two great labels to release it's debut album, "Grease Fire in Hell's Kitchen"! The band proudly announces signing with SOS Records (USA) and I Scream Records (Europe) for this much anticipated release. The record will be available on June 22nd in Europe through I Scream Records and June 26th in the United States through SOS Records.

SOS Records is best known for their large roster of punk bands including The Exploited and The Adicts.

I Scream Records has some of the best hardcore and punk bands on the planet, including fellow New Yorkers Madball and Agnostic Front!

The Birth of SPOILER NYC
What is the state of punk rock in 2007? Somewhere along the line, its angry, moralistic spirit left the scene for hardcore and metal, and melodic punk rock was suddenly nice. And funny. And safe. And dull. Overall, the current state of punk rock is shit.

SPOILER NYC sets out to change all that. The New York trio offers a darker slice of punk rock. A trip back in time to what made punk rock dangerous in the first place. To a time where a punk rocker was more likely found causing a fight in a bar or traveling along the back roads in a '66 Rat Rod instead of hanging out in the food court of the mall.

Founded in 2006, SPOILER NYC was inspired by the loss of a dear friend to lead vocalist, Alan Robert. While on tour with his other band, Life of Agony, Robert found himself writing music which didn't quite fit with what he was currently doing. There was an angrier, more aggressive streak to these new songs which were coming out of him. They weren't metal or hard rock, they were punk.

Turning to longtime friend, "Junkyard" Chris Silletti, Robert found someone who also held a lifelong passion for this type of music. Someone who considered himself a punk and was proud to say it. While out on the road, the two would spend hours listening to bands like Social Distortion, Rancid, and The Misfits among others. Music which inspired the two to stop just talking about starting up a project, and finally making it happen.

"When we returned home from the LOA European tour at the end of 2005, Silletti and I would meet up, throw a few back and jam on songs I had written for SPOILER NYC," Robert said. "The soulful guitar leads he added fit perfectly with what was coming out of me. We ended up with some true, old school punk tunes."

From the fuck-the-world attitude of "Every Person Is Corrupt," "Die Alone" and "Dead To Me" to the heartfelt emotions of "Unpredictable," SPOILER NYC reminds us that you can pack more emotion into an under-three minute song without having to lose the street attitude. Something the current state of punk sorely needs.

With the addition of Tommy Clayton on drums to complete the three piece unit, SPOILER NYC plans to take their message from the recording studio to the road this year. Don't expect to find this band playing the fine auditoriums anytime soon, they plan on seeking out the smallest, grittiest venues they can find to ensure that every fan walks away having experienced the same thing....punk rock, the way it was meant to be.

Spoiler NYC will head into the studio with seven-time Grammy Award Winning Producer/Mixer Ken Lewis (Beastie Boys) in May, to begin recording songs for the group's second album, titled "Banned in 38 States." The band have been writing the follow-up to their debut, "Grease Fire in Hell's Kitchen" (SOS Records/I Scream Records) over the last few months and are psyched to start laying tracks down for the new tunes. 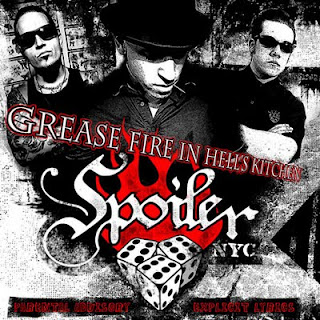