The Man Who Fell to Earth—Nicholas Roeg’s 1976 film starring David Bowie—is being adapted into a series for CBS All Access, Variety reports. The classic sci-fi flick, based on Walter Tevis’ 1963 novel of the same name, marked one of Bowie’s most memorable roles, as Thomas Jerome Newton—an alien posing as a human in an attempt to save his home planet.

Though the cast for the new show has not yet been revealed, Alex Kurtzman (Star Trek) and Jenny Lumet (Rachel Getting Married) are slated as writers, executive producers, and co-showrunners. Kurtzman is also set to direct.

According to Variety, Kurtzman and Lumet claim that the series will explore “the next chapter” of the story from the novel and film. “Some strings will connect to both the novel and the film but if you haven’t seen the film or haven’t read the novel, it’s fine,” Kurtzman told Variety “You’ll get to have an experience that’s entirely singular. If you have, you’ll have the benefit of understanding the history of the world that both of those things set up.”

“We loved the emotional moments in the book and we loved the visual spectacle of the movie,” Lumet added. “We’re taking it forward.”

A final release date for the series has not yet been announced.

The early years of David Bowie’s career will be the focus of the upcoming five-disc Conversation Piece. The box set collects the singer’s 1968 and 1969 works, from home recordings to his work with guitarist John “Hutch” Hutchinson and the mime group Feathers to Space Oddity.

The set’s fifth disc boasts producer Tony Visconti’s new 2019 mix of Space Oddity that restores the box set’s title track, “Conversation Piece,” on the track list; the song was initially removed from Space Oddity due to time constraints. The 2019 version of Space Oddity will also be sold separately both digitally and on vinyl.

“It was so much fun to find hidden gems of musicianship with more time to mix the second time around, a guitar twiddle here, a trombone blast there, Marc Bolan’s voice in a group choir and more detail in general that we overlooked all those years ago when the label gave us a week at the most to mix this album,” Visconti said of the 2019 mix. “And in the details, you will find 22-year-old David Bowie, who would soon take the world by storm.” 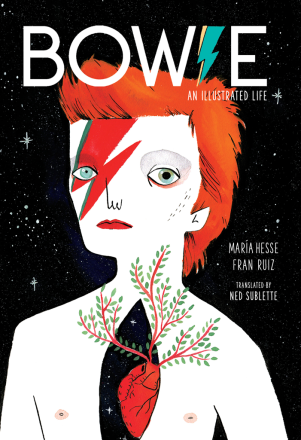 David Bowie was a master of artifice and reinvention. In that same spirit, illustrator María Hesse and writer Fran Ruiz have created a vivid retelling of the life of David Robert Jones, from his working-class childhood to glam rock success to superstardom, concluding with the final recording sessions after his cancer diagnosis.

Narrated from the rock star’s point of view, Bowie colorfully renders both the personal and the professional turning points in a life marked by evolution and innovation. We see Bowie facing the sorrow of his brother’s mental illness, kicking a cocaine habit while other musicians succumbed to deadly overdoses, contending with a tumultuous love life, and radiating joy as a father. Along the way, he describes how he shattered the boundaries of song and society with a counterculture cast that included Iggy Pop, Brian Eno, and Freddie Mercury—as well as his own creations, Ziggy Stardust and the Thin White Duke.

Evocatively illustrated from start to finish, Bowie is a stellar tribute to an inimitable star.

Robert Fripp, King Crimson’s co-founder and guitarist, said he is involved in a dispute with David Bowie’s estate over being properly credited for his contributions to the late artist’s 1977 Heroes and 1980 Scary Monsters albums. The musician took to Facebook on Tuesday to describe what he claims are rules of “historic injustice” that are blocking the recognition of his contributions to the LPs.

In Fripp’s post, he asserted that he was a “Featured Player” on the albums in question. “This accreditation as a Featured Player is supported by Brian Eno, Tony Visconti, David Bowie himself (although the terminology was not then in use), and the court of Public Opinion over four decades.” Bowie: Stardust, Rayguns & Moorage Daydreams is a story of reinvention, following Bowie as he emerges from his ordinary life as David Jones and into the exploding rock scene of mid-Sixties London. Part biography and part imagination, the illustrations depict both true-to-history recording sessions and shows as well as imaginary outer space conversations between Bowie and Ziggy Stardust, his legendary alter-ego sent from Mars. The graphic novel follows Ziggy’s origins and his inevitable end, leaving off before Bowie’s next manifestation begins: The Thin White Duke.