Vraana, thank you for the compilation. It's good to remember my old days

epinions.com
To me, 1994 wasn't only a bad year in the music world because of the tragic "suicide" of Kurt Cobain. 1994 was also the year when Motley Crue were oficially done for. There is quite a lengthy story to the demise of "The Crue" as many fans fondly refered to them as.
September 1989, Vancouver. The release of Motley Crues' 6 time platinum record Dr Feelgood. They were the kings of the air waves. They were untouchable. They could do no wrong in the eyes of the fans. They had wrecked havoc on many a hotel room with Ozzy Osbourne & on their own many many times. They have stolen and wrecked Ferraris'. Heck the lead singer, Vince Neil killed somebody & only spent 18 days in prison. And after everything they did, they were still looked upon as gods by the masses.
What could of killed such a dedicated following, you ask? Grunge. Yep, thats right Grunge. The style that Nirvana pioneered and many after would copy. Grunge bought the demise of glam. And I know many of you are thanking your lucky stars for that, but not me. Bands like Cinderella, Warrant, Ratt & Motley Crue, who had been money makers for any label that had them signed, were all now liabilities in peoples minds.
Thats not it but, no no no. Don't be thinkin' that for even one second that grunge is the only factor contributing to the downfall of Motley Crue. Even more blame should be aimed at the firing/quitting incident of '92 that saw Vince Neil leave the band. If they would've remained together, who knows what kind of insane sucess they were fixin' to have, but we'll never know anything but the bitter end for the Crue.
Now you're probably thinking they weren't able to put out a quality album without Vince, if you thoght that you're wrong. '94's release "Motley Crue" was nothing short of amazing but people didn't know how to take it. If you ask me, the failure of the band could've been prevented if they would've just changed the name of the band. Because anyone expecting your typical fun, party album that the Crue usually put out, would've got a much more serious, darker, heavier, professional album. With the new, deeper voiced vocalist, John Corabi, Motley Crue could move away from their lighter side and concentrate fully on the music.
I have no doubt in my mind that if this album was released today under a different name it would go platinum easilly. It's hard to beleive something such as a name could make such a huge impact on the sucess of an album. So my advice to you metal/rock fans out there is to pick up this album because it really is not anything even close to what one would think an album called "Motley Crue" would sound like.

Tracklist
1.Power to the Music
2.Uncle Jack
3.Hooligan's Holiday
4.Misunderstood
5.Loveshine
6.Poison Apples
7.Hammered
8.'Til Death Do Us Part
9.Welcome to the Numb
10.Smoke the Sky
11.Droppin Like Flies
12.Driftaway

Can somebody please re-up "Red, White and Crue"?

My post/link above don't work?! 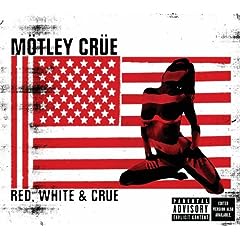