Джаред, ty very much for this metal art!

any rapidshare link for this?

Amazing album one of the best!

bvbfan
you are cool guy

http://www.mediafire.com/?tcnjzko3mmf
++++plzz i unders. english or frensh no russia ok ++++

Potkepo
here's the one, but i'm not sure of the bitrate... the size is 87 Mb - click me.
taken from here, thanks goes to power/speed.

The progressive German death metal band OBSCURA was founded in 2002 by
guitarist/vocalist Steffen Kummerer and drummer Jonas Baumgartl. The band caused
a stir when they - out of nowhere - toured as support for SUFFOCATION on their
European tour in 2006 and when they independently released their debut album
RETRIBUTION that same year. The release of the debuet album followed a second
European tour, this time as headliner, in 2007

Together they create their vision of the future of extreme metal. A symbiosis of
death, thrash and black metal merged with progressive elements and technical as
well as compositional demand. OBSCURA has set 'COSMOGENESIS' as the title of
it's second full-length album, due in early 2009 via Relapse Records. The CD
features guest appearances from Ron Jarzombek (WATCHTOWER, SPASTIC INK, BLOTTED
SCIENCE) and Tymon Kruidenier (CYNIC, EXIVIOUS)

Cosmogenesis succeeds where others have failed because it doesn t stick
exclusively to a barrage of sheer brutality or a never ending show of excessive
technical skills. The album regularly dips into many different kinds of melodies
to provide a much more well rounded experience. Each track is nearly perfectly
layered together into a complete maelstrom of force that should make it onto the
must have list of technical death metal fans. The only question is how will
Obscura possibly top this with their next album?

Lows: There's almost too much to digest at once, the album may take multiple
listens just to get everything out of it

Bottom line: A masterpiece of technical death metal with a good deal of
non-metal influences that provides a very satisying musical experience

this is a fucking SICK CD 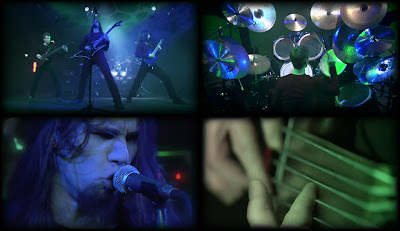 can somebody upload "Cosmogenesis" FLAC?

OBSCURA начали запись альбома
In the Fire of Burning Heavens, we Devour the Drowning Fools Obscura s highly-anticipated new album, Omnivium, sees the critically
acclaimed quartet cementing their place amongst the all time metal elite.
Omnivium finds the band pushing the progressive edges of the genre s sounds
to new heights while delivering the technical metal that has become their
calling card. The band gracefully blends brutality and beauty with complex,
commanding songs played at stunningly virtuosic levels. Tracks such as the
album opener Septuagint , Vortex Omnivium , Euclidean Elements and Celestial
Spheres are expressive and elaborate, and exude class and the confidence of a
band at the peak of their abilities. Omnivium very clearly raises the bar for
extreme, technical metal and is Obscura s finest moment to date.

Christian Muenzner - Beyond The Wall Of Sleep (2014) Fourth record from this raging technical death metal band. They get better
with every record, and at this point it's getting hard to fathom. Pick it up,
see them live and get ready to get your face melted.