OOMPH! incorporates many styles of music such as metal, industrial, alternative rock, electronica and gothic to create their sound. OOMPH!'s change of style between their self-titled debut (1992) and its successor Sperm (1994), leaning more heavily to a guitar-driven metal sound without giving up their electronic roots, inspired numerous musicians, most famously Rammstein, Megaherz and Eisbrecher to follow their lead.[2]

OOMPH! released their first album on Jor's Machinery label, then releasing their consecutive albums on its sister label Dynamica. They stayed with Jor, until his labels disappeared during the acquisition by Sanctuary Records at around 1996/1997.[3]

It was Virgin Schallplatten where OOMPH! finally signed. Between 1998 and 2001 they released three albums on the Virgin label, Unrein of 1998, Plastik in 1999 and Ego from 2001, fulfilling their contract, but did not continue, feeling that the record company never fully explored their potential. With the benefits of major-label status however, OOMPH! gained a larger following, and toured with labelmates Skunk Anansie in 1999, later opening for the Finnish rock band HIM.

In 2004, OOMPH! released their first single "Augen Auf!" ("Eyes Open!") on a new label, this time on Supersonic Records, part of the Sony BMG group of music companies, from their eighth album Wahrheit oder Pflicht. It marks their first Number One hit in Germany, thus eventually bringing forth their major commercial breakthrough. Their 8th album hit number 2 in the Media Control Charts. "Augen Auf!" became part of the FIFA 2005 soundtrack.

In August 2006, Virgin Schallplatten released the compilation album 1998-2001: Best of Virgin Years. It contains tracks from OOMPH!'s three Virgin albums and few rarities including Monolith, This Time (previously released only on Unsere Rettung single), Niemand, Swallow (unplugged) as well as live versions of Gekreuzigt (Crucified) and Unsere Rettung (Our Salvation). The band distanced itself from this best-of release and asked the fans not buy it as the band's current label GUN had scheduled a best-of compilation as well.

On 1 December 2006, OOMPH!'s official best-of album, Delikatessen (Delicacies) was released under the GUN label. The songs on it were hand-picked by the band itself. It contains tracks from all nine OOMPH! albums, b-sides, remixes and never-heard before tracks like The Power of Love and Gekreuzigt'06. It is available in a single disk form with 19 tracks, and a limited edition two-disk digipack with the original 19 tracks plus a second disk with 19 more b-sides and remixes. By 17 November 2006, OOMPH! released those two songs in a form of double single to promote the new compilation release.

On 9 February 2007, the band released their final GlaubeLiebeTod single - Traumst Du?, featuring the female vocalist from Die Happy, Marta Jandova. The single peaked at number 9 in the media control charts. OOMPH! performed the song live the same day at the 2007 edition of Bundesvision Song Contest, representing Lower Saxony in the competition, coming in first place.

OOMPH!'s first DVD was Rohstoff, which contains live footage consisting of 23 songs, most of the videos the band has created, making-of videos, and an exclusive interview. The DVD was released on July 20, 2007.[4] Later, a new song called "Wach Auf!" appeared in the movie Aliens vs. Predator: Requiem; the single was released on 4 January 2008.

OOMPH!'s latest album, Monster, was released on August 22, 2008 and hit the Media Control Charts at number 8. The band wrote 25 new songs, of which only 13 made it on the album. The band's most successful single from the new album is "Labyrinth", released in September 2008, which peaked at number 26 in the Media Control Charts. The remaining tracks will be released as B-sides on the upcoming singles. The first was "Sandmann", released in February 2009. Monster was reissued in June 2009 to include "Sandmann". 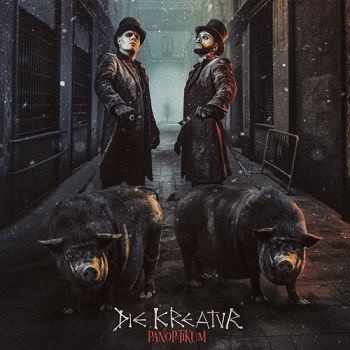